Scream Factory has unleashed the full list of bonus features that will be included in their Friday the 13th Collection (Deluxe Edition) set, to be released on October 13, 2020

END_OF_DOCUMENT_TOKEN_TO_BE_REPLACED 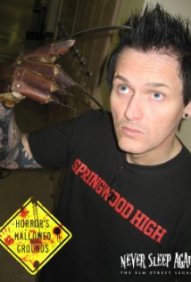 Sean has turned being a horror fan into a full time career. As a talent agent he represents many of the biggest names in Horror for appearances/conventions. He is also an accomplished producer/writer. He produced many of the additional special features and featurettes included in the Scream Factory/Anchor Bay special edition box set Halloween Complete Collection including a specially filmed documentary with Jamie Lee Curtis.

In 2009 he co-wrote the film ‘The Black Waters of Echo’s Pond‘ which starred Danielle Harris & Robert Patrick. He produces his own series ‘Horrors Hallowed Grounds‘ where he revisits iconic Horror locations from films such as Halloween & A Nightmare On Street and also contributes to HorrorHound magazine.

“….It just started as a hobby. I went out searching for the locations from the original Halloween and when I happened upon my very first location it was like visiting a childhood home”
END_OF_DOCUMENT_TOKEN_TO_BE_REPLACED