We spoke with actor Lance Guest known for his role as Jimmy in Halloween II. He has gone on have to many other Film roles including Jaws: The Revenge, The Last Starfighter and recurring TV roles in shows such as Lou Grant, St. Elsewhere, Knot’s Landing & Life Goes On plus many other guest appearances.

“…That guy is so great. And his job is to just rehearse all week for a half hour show and then do it on Friday.”

What inspired you to become an actor?
Rob Reiner  as Meathead from All in the Family inspired me to be an actor. When I was about 11 or 12, I thought, “That guy is so great. And his job is to just rehearse all week for a half hour show and then do it on Friday.” I was probably wrong about the schedule, but that’s the first I remember seriously thinking about becoming a professional. I didn’t grow in Hollywood or anything, so I didn’t know anybody who did that.

You played Jimmy in Halloween 2 – what was this experience like?
Well, Halloween 2 was the first movie I ever shot, so at the risk of repeating myself, it was so radically different from theatre, (not a lot of rehearsal, shooting out of sequence) any theatre training I had kind of went out the window.  In those days I had enough energy to stay in character the entire 12 hours I was on the set. Ha! I used to charge into my scenes with so much energy that I was always overshooting my mark and blurring through the frame. Dean Cundey, our DP, used to say “Lance, I’d love to you to be in the movie, but you’re killing me here.” We did mostly night shoots and I was covered in Karo Syrup blood a good portion of the time. 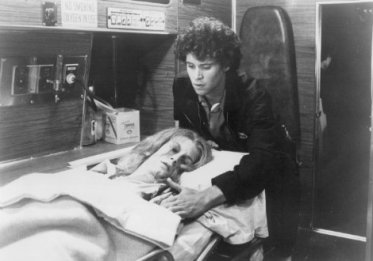 What was it like working with iconic ‘scream queen’ Jamie Lee Curtis ?
I met Jamie at the audition. 8:30 am, somewhere in Burbank. I just remember she had loads of energy that early in the morning. She had a great sense of humour, but she was pretty serious about the acting. One time she didn’t like the shoes or something she was wearing and referred to herself as “Nurd Curtis”. I liked her. I kind of had a crush on her.
In your eyes did Jimmy live (like the TV cut) or possibly die (like the theatrical cut)?
In the original script, Jimmy lives, so I had always thought that was the story. When i saw it, and the end was cut,  I still thought he lived, but that they wanted to give her the final moments of the film, since it’s really her story and not mine. So, in my mind, I lived. In  later Halloween sequel ( H5, H20) Jamie’s character’s kids have the same last name as my characters’ – Lloyd. Which is weird, because Jamie’s ACTUAL kids have the same last name as mine.
Are you a fan or horror films?
The only horror films I see are ones I’ve been in (4!) and if they are franchises, their prequels. Sorry. I’m not knocking them. I just don’t have a affinity for them. Like I’ll see surfing movies, or westerns. I saw The Shining and Angel Heart. Do those qualify as horror movies?
What have your experiences been like meeting fans ?
I was initially a little wary or horror fans, because I didn’t get it, but now that I know them, my initial feeling was totally wrong . I’ve met tons of them. They are a great group, and very loyal. God Bless them.
Where is the furthest place you have travelled for a convention?
Australia, which I love.
You’ve played many roles which has been your favourite?
I don’t have one favourite role, other than one nobody ever saw. It was a little movie called The Wizard of Loneliness” with Lea Thompson, Lukas Haas, and Dylan Baker. It was set in New England during WW2. I was a Lukas’ uncle, a car mechanic.
What’s your favourite film of all time?

Do you have any upcoming projects?
I’ve been involved with original musicals for the past 8 years. Mainly ones that involve the actors also playing the instruments. There are a couple of new ones coming up, but until they are actually on stage, i don’t like to talk much about them.