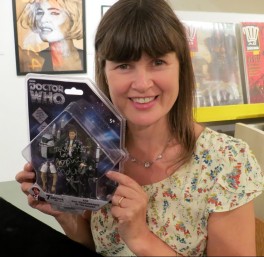 27 years since we last saw Ace travelling in the TARDIS – we at Indie Mac User have caught up with Classic Who Icon Sophie Aldred to talk about all things Doctor Who and life post it’s cancellation in 1989.

“I loved making Doctor Who”

It was something I always wanted to do and I really don’t know why as no one in my family had anything to do with the business. When I was 5 I used to write, direct and star in plays and get the neighbourhood children to be in them; that’s where it all started!

Did you ever watch Doctor Who before you was on it?

Yes; the first Dr I saw was Jon Pertwee in the 70’s. I used to stand outside the living room and watch through a crack in the door in the scary bits!

You portrayed Ace in 9 stories (31 episodes) – out of these which was your favourite episode? 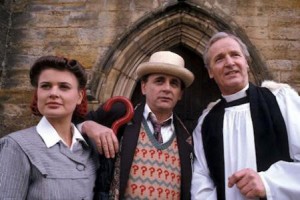 I loved making all of them, but if I really have to choose one then it’s The Curse of Fenric as Ace had so much to do in that one; stunts, emotional acting, climbing out of a window with a baby, falling in love, being seductive, loads of stunts including diving into Lulworth Cove in Dorset…

How would you describe Ace?

What was it like working with 7th Doctor Sylvester McCoy?

He taught me so much. How to question a script, how to add business to make things more interesting to watch, and above all we had such a great time together.

How did you feel when Doctor Who got cancelled?

Gutted. It was a real loss. And I still don’t know what happened to Ace!

Have you watched any of the revival episodes?

Yes, I watch with my family and we love it!

What has been your favourite role?

As an actor you really have to fall in love with every role you play as you have to be truthful, or the audience won’t believe you. Having said that, I am still so lucky to be playing the part of Ace still after all these years on audio for Big Finish.

It’s probably a toss up between Ace and Maureen from Melvin and Maureen’s Music a grams!

I’m very proud of the Kickstarter audio comedy SciFi adventure I’m doing with Trev and Simon (swing your pants) and Clare Eden (Minister of Chance) and I’m having such fun working with people I’ve known for so long as we were all at Manchester University together long long ago.

You can listen for free if you go to www.strangenessinspace.com and we are raising funds for Episode 4, so you really can buy the tshirt!