Lisa Bowerman is back once again as the universe’s favourite archaeologist, Bernice Summerfield and as in Vol. 3 she is with David Warner‘s Unbound Doctor trying to save his dying universe. But now the Doctor is President of the Universe and Benny is starting to wonder if that is a good thing or not. 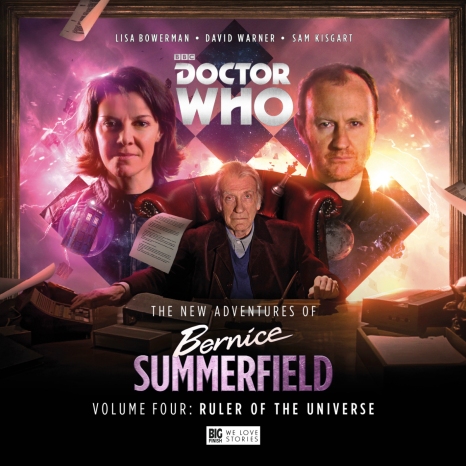 The City & The Clock by Guy Adams

In the opening story Benny is on a dig to try to uncover the fabled ‘Apocalypse Clock’ which might just be able to save the universe. The Doctor sent her there, but when he arrives to visit the dig he seems more worried about his in-tray back in the office or a number of meetings he has to attend. Has the office of President of the Universe strangled the Doctor out of the Doctor? And will the clock be all they hope, or will it instead bring a further problem as the dead start to rise.

Great opener. Straight away you start to again wonder about the kind of man the Unbound Doctor might be and how much Benny is straining to believe he can live up to the name ‘Doctor’. The stakes feel real straight away and although this Doctor seems to have his priorities all wrong, he definitely cares what Bernice thinks of him, in fact you are lead to wonder if that’s all he cares about. And if so, why?

Asking for a Friend by James Goss

In an effort to keep Summerfield on his side, the Doctor goes to counselling. Of course, he does everything he can to avoid talking about his real problems and he tries to cheat the counselling process as he is also trying to cheat time just a little more to avoid the end of the universe, but he is their all the same. But as Bernice worries, can he actually change?

This is such a fun episode whist still progressing the overall plot. Annette Badland, who returns to the Doctor Who and Big Finish folds, as the counsellor is endlessly charming, funny and poignant when she realises the Doctor has played her (I won’t spoil how!). The Doctor too also goes on a bit of a journey throughout this episode, as he is in the set. To the point where at the end of this one you honestly don’t know for sure if he is playing games or actually trying to do some good. 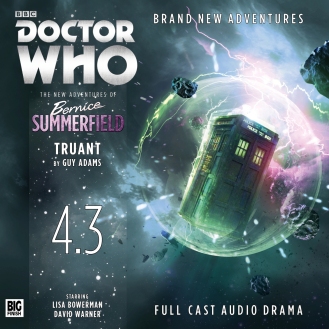 The Doctor goes missing. He has decided it’s time for a holiday; to think about what he is doing as the President and how he might be able to save the day. To give his brain time to catch up he decides to go on a proper Doctor-like adventure to clear the cobwebs. Benny isn’t sure this is the right time and the Doctor is disappointed to learn being the president actually opens the doors he is trying to dramatically break down.

This is a real ‘be careful what you wish for’ story for Bernice. After she had spent so much of the other stories complaining the Doctor is letting the Bureaucracy stand in the way of his acting like the Doctor, he goes off to be the Doctor and she is now fearful he will be away from office too long. The disappointment of David Warner as the Doctor when the adventure he has planned doesn’t go as he hopes is funny, but then leads to some real drama. The circumstances of the people he is trying to save and the resolution is also a great mix of comedy and drama.

The True Saviour of the Universe by James Goss

Time is running out. The Master is back and the Doctor is threatened with being removed from office. Can he keep his job and save the day, or will the Master finally get to rule the universe like he always hoped?

A satisfying and well-crafted ending that leaves you guessing till the end (and a little beyond, depending on what you believe of the ending). Sam Kisgart (I’m sure he sounds like someone else from the Doctor Who world…) is a great Master once again. He feels like he has the same evil underneath, but he has a sort of charm to him the Master doesn’t usually have and he seems to have a genuine affection for Benny.

This is a perfect set. Both Goss & Adams bring a beautiful, funny and thoughtful style to these stories and as a listener it feels like they write with one voice, despite their own unique styles.

The acting choices by Warner & Bowerman are so well chosen. As this is Bernice’s set she is the engine for everything that happens in one way or another, but as a set with the Doctor in it they also manage to keep him front and centre, tormented by having to make life or death choices and for once knowing he really might not be able to save the day. Along with Bernice you feel frustrated at the Doctor not doing the right thing, then as Warner adds extra pathos to a line already dripping with it, you feel for him being in an impossible situation.

Scott Handcock is always a great director for Big Finish, but he has surpassed himself with the guest casting including Annette Badland, Hattie Hayridge and Sam Kisgart among so many other great performances.

It’s also a funny coincidence that this release should come out so soon after a 5th Doctor adventure that sees him as President of Gallifrey and it’s fun to see how the two different Doctors face an unwanted Presidency.

Again, I don’t want to spoil things for anyone who is reading this before listening, but given the ending of this set, I can only look forward to the new direction the next set goes in and I cannot wait to find out.

Check out our review of Volume Three

Buy it on CD or download now at https://www.bigfinish.com/releases/v/the-new-adventures-of-bernice-summerfield-volume-04-ruler-of-the-universe-1640

One thought on “Review: The New Adventures of Bernice Summerfield Vol. 4”