Truth Seekers is a supernatural comedy drama series about a team of part-time paranormal investigators who team up to uncover and film ghost sightings across the UK, sharing their adventures on an online channel for all to see. However, as they stake out haunted churches, underground bunkers and abandoned hospitals with their array of homemade ghost-detecting gizmos, their supernatural experiences grow more frequent, more terrifying and even deadly, as they begin to uncover a conspiracy that could bring about Armageddon for the entire human race. The series stars Nick Frost as Gus, Simon Pegg as Dave with newcomer Samson Kayo as Elton, Malcolm McDowell as Richard, Emma D’Arcy as Astrid, and Susan Wokoma as Helen. We have seen the pairing of Frost & Pegg several times since their collaborations with Edgar Wright to varying degrees of success. This show marks the first produced television series (for Amazon) from their ‘Stolen Picture’ production company (following their feature film debut with ‘Slaughterhouse Rulez’) which see’s the pair write, star and produce and it’s fair to say they have hit the ground running with Truth Seekers. 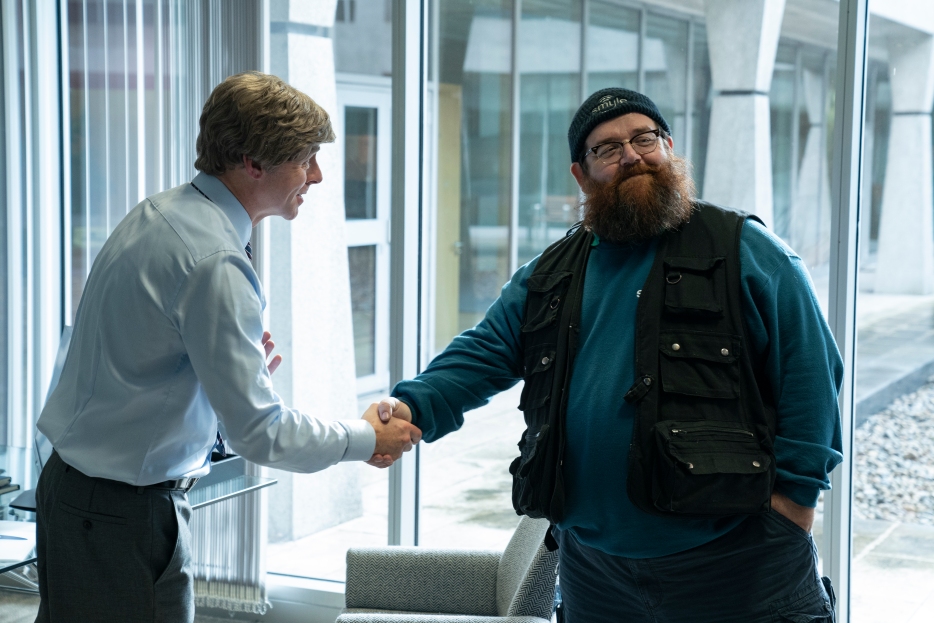 Unlike many of their previous efforts which tend to see Frost in a more secondary role, here he is the lead in an incredibly charismatic and loveable performance as Gus; cable installer by day, paranormal investigator and ‘Youtuber’ by night. Pegg plays the non-the-less important supporting charecter of Dave; Gus’s boss at the fictional broadband company ‘Smyle (fans of British sitcom ‘Black Books’ might see this as a slight nod to his charecter of smarmy Goliath Books owner Evan and it’s delightful..).

Gus is accompanied by his makeshift gang of apprentice Elton (relative newcomer Samson Keyo) who essentially plays the robin to Pegg’s batman as they go on paranormal adventures/mishaps whilst filming videos for Gus’s charming but poorly subscribed YouTube channel ‘Truth Seekers’. The gang is completed by Elton’s sister Helen (Susan Wokoma); a real life introvert/virtual extrovert who brings a flavour of the cosplayer and YouTuber community as well as Astrid; a girl who is troubled by ghosts who comes to the group for help and ends up tagging along. The regular cast is rounded out by a hilarious and unexpected performance from big-screen legend Malcolm McDowell as Gus’s father Richard who takes the ‘old fart/fuddy-duddy’ charecter to new heights.

We are also treated to some great guest performances such as ‘Mighty Boosh’ star Julian Barratt as the enigmatic and mysterious Dr. Peter Toynbee which is a real treat alongside other noticeable guest spots from the likes of Kate Nash and Kelly Macdonald.

The real trick of this show is that whilst offering some humour it adds serious weight and investment into it’s sci-fi/paranormal elements and character’s development and their own beliefs in what they are doing and you can’t be help but get sucked in by it’s charm and un-ashamed britishness; there are certainly comparisons to be drawn to other great British SciFi such as Doctor Who (and there is a few obvious nods in that direction…) and Attack The Block. This show has somehow captured that same magic whilst successfully incorporating some more current cultural references and tropes…we very much look forward to more TV from this talented duo.

British Sci-Fi Comedy at it’s best! We think this just might be your new favourite show – A+

The show will be released exclusively on Prime Video on October 30th. All 8 episodes will be released at once and with each episode at around 25mins it makes the perfect binge watch over Halloween!

An interactive escape room experience is available for fans to interact with the show.