Heroes and Villains is the latest release from The Worlds of Blake’s 7 range from Big Finish. Exploring the universe away from the Liberator, boxsets so far have focussed on fellow freedom fighter Avalon, the mysterious Clone Masters, Colin Baker’s bombastic villain Bayban the Butcher and the  insidious criminal organisation known as The Terra Nostra. Each of these releases have seen members of the show’s original cast appear. 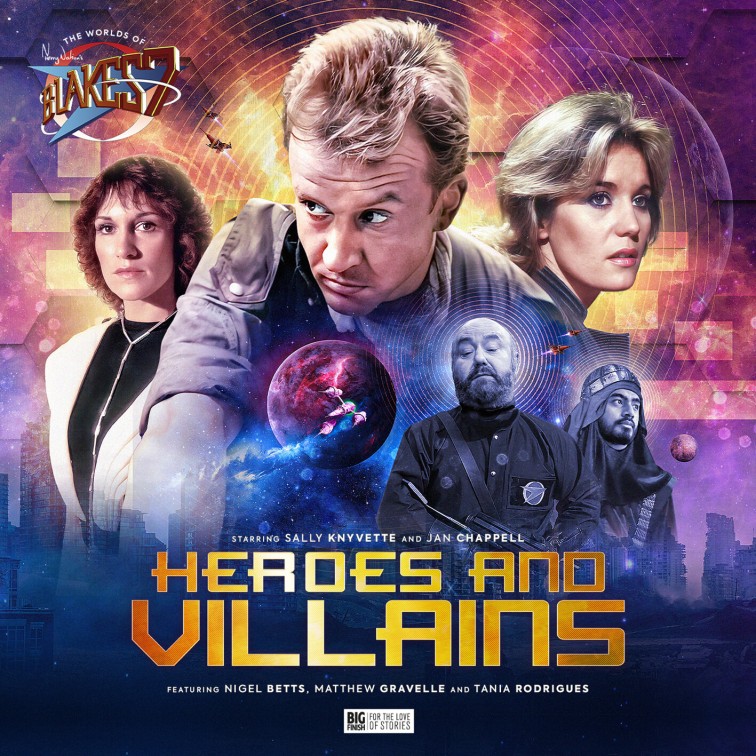 In the aforementioned Clone Masters set, Jenna (Sally Knyvette) and Cally (Jan Chappell) were paired up. It’s not something that happened much on screen, with either Blake or Avon generally leading the action, but the duo works incredibly well together. Heroes and Villains showcases them in a trio of side missions, away from the Liberator and up against some familiar villains – well, familiar to us at least. First there’s the Amagons, a group of double-dealing space pirates, then the rogue trader Dorian and finally the Federation’s feared interrogator Shrinker.

Ah, the Amagons – who doesn’t love a space pirate? One of their number, Tarvin, managed to (briefly) seize control of the Liberator back in Series A’s ‘Bounty’ but he and his people came to a sticky end. At the time, he said his victory would make him a prince among his people and writer Trevor Baxendale runs with the idea, creating a regal hierarchy. This story brings Jenna, who had experience with them from her smuggling days, back in touch with an old contact – Mandala, The  Amagon Queen.

The tale plays out on a Federation backwater, under the control of a weak and ambitious commander and his super-efficient Mutoid assistant, who’s clearly the power behind the throne. Throw in Cally, who’s also working with the local rebels, and this is an enjoyable tale with plot and counter plot. Just to cement the pirate theme, there are even scenes set on water too.

In a hard-working cast, many have dual roles. Shane Zaza impresses as both the snivelling Spindler and the larger-than-life Amagon King, while Laura Aikman demonstrates tremendous versatility as both the Mutoid and the young rebel Pesh. For her part, Tania Rodrigues entertains as the charismatic Mandala.

While Big Finish’s Blakes’ 7 audio endeavours are usually confined to elements from the show’s first three series, as created by Terry Nation, this story marks a rare exception. The company now have the rights to use script editor Chris Boucher’s creations – hence The Deal with Dorian.

Onscreen, the (former) crew of the Liberator met the trader in Series D’s opener ‘Rescue’, but this story details an earlier encounter with Jenna and Cally. Both parties are on the trail of a shipment of the rare and outlawed element acquitar, which just happens to be a vital component in teleport systems.

Mark B. Oliver’s tale cleverly threads the continuity needle, it’s a prequel to ‘Rescue’ while at the same time providing a cracking adventure. As well as his vampiric qualities of absorbing other’s life energy, Dorian gains a mesmeric ability here. While we didn’t see this on screen, he was merely charismatic, it feels a consistent development of the character and his dubious powers.

Dorian was originally played by the late Geoffrey Burridge. Here, Matthew Gravelle (Broadchurch, Manhunt) takes on the role and gives Dorian that same self-assured, slightly arrogant manner. Kudos to director Lisa Bowerman for a piece of perfect casting. In the wider ensemble, Gabrielle Glaister plays the amoral scientist Skillaine and it’s always good to hear Alistair Lock playing as Zen and Orac (he was also the sound designer and composer on The Amagon Queen).

Finally, writer Andrew Smith does a lot with a little as he fleshes out a backstory for the Federation’s most feared interrogator: Shrinker (from Series C’s ‘Rumours of Death’). Here, sometime earlier, he’s called into ply his trade on a captured Jenna Stannis and we soon get the measure of the man, from the origin of his nickname to his thoroughly brutal methods of extracting information.

Everyone Talks to Shrinker also takes a wider look at the Federation’s practicalities and its horrific scientific endeavours. We learn of battleground planets, where cadet troopers train and failed experiments are let loose to serve as target practice. While Jenna and Cally are both horrified by what they learn, for Shrinker it’s all a necessary furtherance of a society he believes in.

On screen, Shrinker was played by the late John Bryans. Here, Nigel Betts takes on the role and he’s equally vile, with that undercurrent of cowardice that bullies often display. In the wider cast, Ahmed Hamad impresses as Cally’s mutated ally Kelver, while Nicola Goodchild provides another take on the amorality of the Federation’s scientific arm in Lana Tremayne.

Heroes and Villains helps to redress a decades-long imbalance as Terry Nation clearly envisioned the Liberator’s female crewmembers as leading parts. Jenna was a talented pilot with a shady smuggler’s past, who was capable of handling herself. Cally was the sole survivor of a freedom-fighting cell, with a unique alien heritage. Individually or together, you could envisage them leading a show today (commission it someone, please!) Both actresses brought plenty to the table in their performances, but in the late 1970s and in the mix with characters like the passionate Blake, cynical Avon and comic Vila, they were unfortunately side-lined. Here, given the space, both Sally Knyvette and Jan Chappell effortlessly lead the action.

As for the villains? The Amagons are fun, if fairly disposable, while both Shrinker and Dorian are eminently well worth the further development they’ve been granted here. Presumably, credit for these choices must lay at the door of script editor and producer Peter Anghelides. All three stories are well directed and backed by period-perfect sound design and music, as ever. I do have one minor grumble though: despite all the female empowerment I’ve enthused about, a giant Dorian looms between Cally and Jenna on the cover artwork. It seems a shame as it makes him look like the boxset’s lead, rather than just a guest star.

After the first slew of announcements for The Worlds of Blake’s 7, Heroes and Villains came as a bit of a surprise. It was a very welcome one though and proves that the show’s universe still has plenty of corners to explore. More please!

The Worlds of Blake’s 7 – Heroes and Villains is available on CD and download from Big Finish.
Order on CD from Amazon.